×
My account
Promotions
Deposit now
HOW TO BET?
FAQ
Call us
Featured games

Infinite Blackjack is a fantastic, feature-packed version of Blackjack for an unlimited number of players with low betting limits. Thanks to massive multiplayer membership and advanced software that combines live dealing of physical and virtual cards, all players can enjoy an exciting live gaming experience without having to wait for a seat at the table to become available. In Infinite Blackjack, all players are dealt the same starting hand as the live dealer. Then, after the cards are dealt, each player can play the hand as they wish. However, all players may end up with different hands and odds of winning, as if they were participating in a real seven-seat Blackjack table. 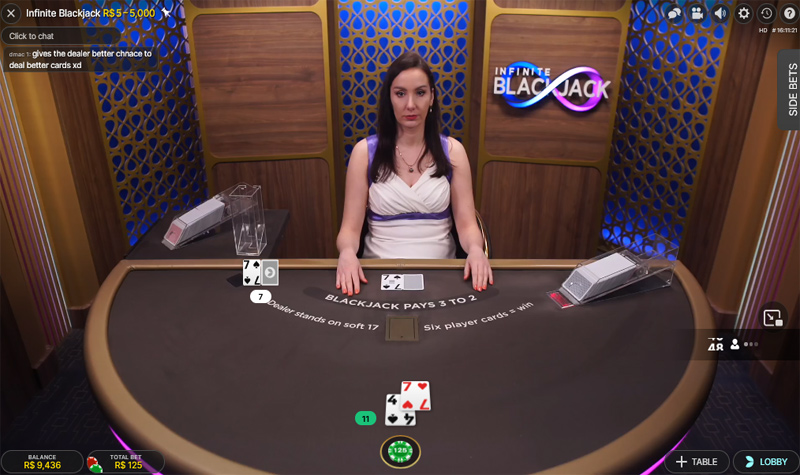 How to play Infinite Blackjack

Players take their positions at the table and try to reach a hand closer to 21 than the dealer's. The game uses eight common decks of 52 cards. The game itself offers the common Blackjack main bets as well as the Six Card Charlie rule and a variety of side bets.

Player decision making is aided by real-time statistics that show the betting decisions of other players on the same hand during betting time counting each round of the game.

BLACKJACK - If your starting hand value is exactly 21, you've just won a Blackjack!

If the player and both come out with Blackjack, the game ends in a tie and the player's bet is returned.

“SIX CARD CHARLIE” RULE - If, at the end of the game, a player's hand ends up with six cards totaling 21 or less, the player automatically wins the main bet, even if the dealer has Blackjack. If a hand split occurs during the game, each hand is evaluated individually.

MAKE YOUR DECISION - As soon as the player receives his first two cards, it will be possible to make the first decision regarding his hand between Draw, Stay, Double or Split. If no decision is taken before the bet countdown expires, a player's failure to respond is interpreted as a Draw if the player's score reaches 11 or less and Stand if it adds up to 12 or more.

DOUBING - If the player's starting hand value is not 21, he may decide to double the bet. With this, the player's bet is doubled and he receives only one additional card to complete the hand.

SPLIT - When a player's first two cards are of the same value, the player may decide to "Split" into two separate hands. If the player splits two Aces, he will only receive one additional card in each hand. Doubling up will not be allowed. Note that the possibility of winning with a “Six Card Charlie” also applies to split hands.

CRUPIER'S HAND - Right after all participants have completed their turns, the dealer reveals the value of his hole card live. The dealer must Draw with a hand less than or equal to 16, and at the same time Stand with a good hand greater than or equal to 17.