Down the rabbit hole we go to the magical world of WildLand in SpinPlay Games’ new slot, Alice in WildLand! Join Alice as she encounters the mischievous, grinning Cheshire Cat triggering Copycat Wilds, Cheshire Multipliers and Nudging Copycat Wilds in Free Spins! This game will bring out the believer in you! Alice in WildLand, played out on two reel sets, introduces Alice on an adventure through WildLand where she encounters the Cheshire Cat, the ever-running late Rabbit, the tranquil Caterpillar, and peculiar potions and pastries. The game keeps players engaged with the Copycat Wilds. Triggering the feature is easy: land an entire reel of Wilds on either reel set and the stack copies to the corresponding reel on the other reel set. The Cheshire Cat’s generosity is as enormous as his grin in the Cheshire Multipliers Feature where players can win over 12,000x. The player can win up to 6 Cheshire Multipliers in one spin! Land an entire reel of Wilds on the same reel of both reel sets to be awarded a Cheshire Multiplier. Also, watch for him to randomly appear during any spin to award a multiplier. You’re not dreaming, all multipliers add together and apply to all wins! Don’t be late for the very important date with Free Spins! The Copycat Wilds and Cheshire Multipliers features can trigger more often in Free Spins as the Wilds nudge to fill the reels!
FREE 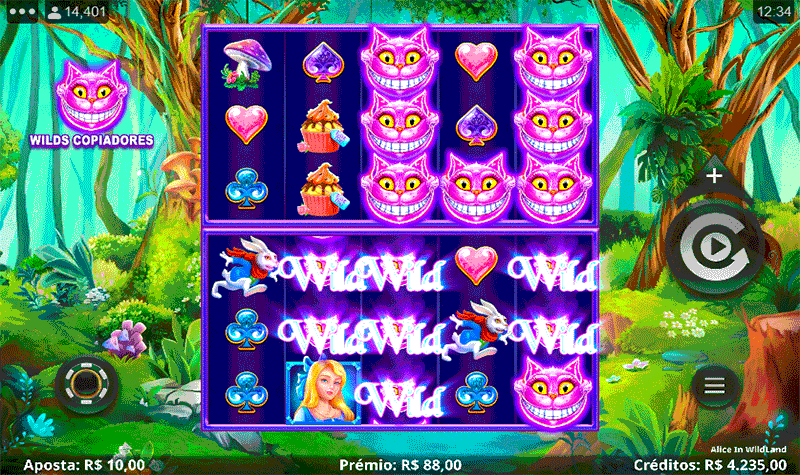 How to play Alice in WildLand